The initial launch of the 0xmons platform is now live! Version 1 (Azathoth) is now released with two main components: Farming and Summoning. (Spawning is a planned feature coming later on.) In this post, I’ll give an introduction to the platform, the three main components, the XMON token, and my thoughts on governance.

In 0xmons, you play the role of an acolyte summoning monsters from the great beyond into tiny pixels on your screen.

The NFT part is obvious; the whole platform is built on Ethereum, and each monster is represented by this ERC-721 contract. My work on this project has spawned some nice stuff that generalizes to being useful for other NFT projects, and I’ll be open-sourcing as much as I can.

The machine learning part is what drives the intrigue around the NFTs. Many projects have done algorithmically generated art. I am offering a different take, one that tries to be a bit more novel. I am using a Generative Adversarial Model trained on pixel art that spits out these monstrous blobs of pixels:

Currently, the image generation is happening off-chain, but I have a few ideas I want to explore regarding on-chain registries and verification of each monster’s image data. This will be next focus now that Azathoth is live.

As for the creative part, there’s a whole mythos that’s being developed along with these pixel monsters. You can look forward to a unique, interesting backstory for your 0xmon NFT. This backstory is also AI-generated, human-curated.

So, what makes 0xmons cool?

You can currently stake XMON-ETH LP tokens to acquire more XMON tokens. This is the normal farming you’re used to, no extra gimmicks. 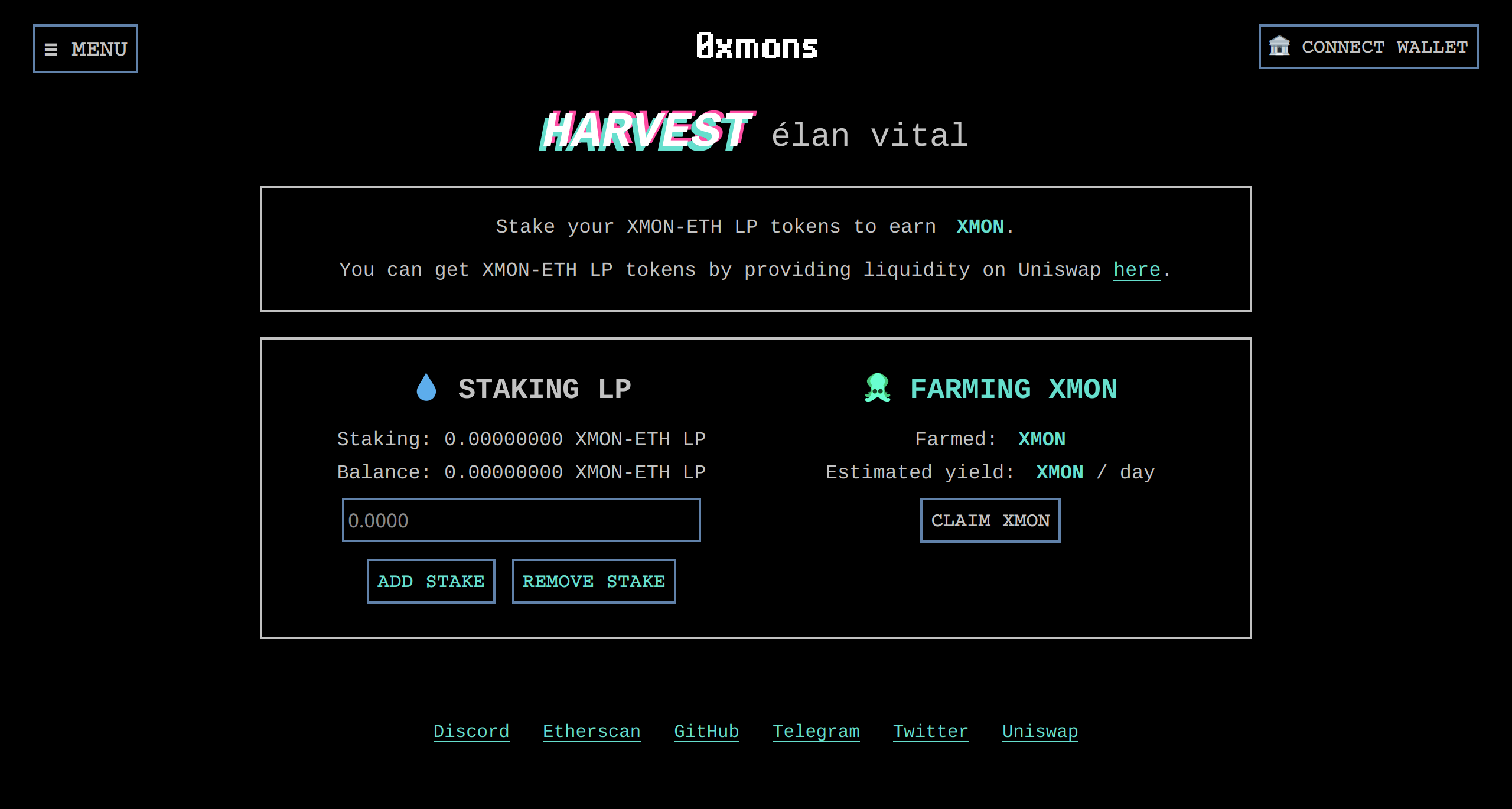 See this post for updated farming details and amounts.

Right now, you can stake your XMON tokens to acquire DOOM, and then redeem the DOOM for 0xmon NFTs. This is similar to how users redeem Pineapples for collectibles in MEME. 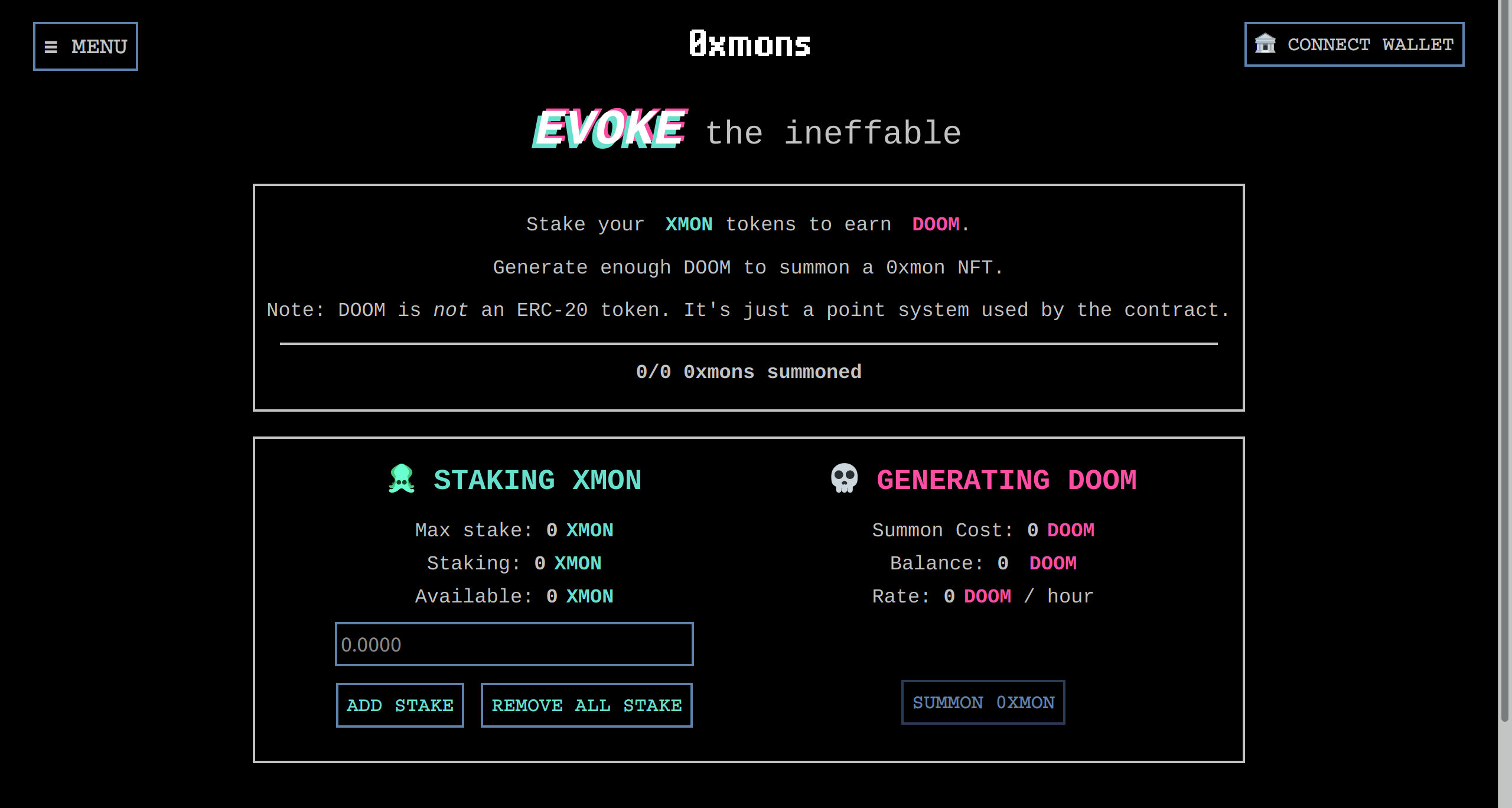 The DOOM cost to summon a 0xmon goes up with subsequent summons. The summoner contract is deployed to mainnet here.

The initial parameters (subject to change) are:

The second method will be to acquire two 0xmons and then use them to spawn a third. Spawning takes an XMON fee. At launch, each pair of 0xmons can only be bred together once, e.g. monster A and monster B can only spawn 1 offspring. After spawning, there will be a delay before the monsters can spawn again. 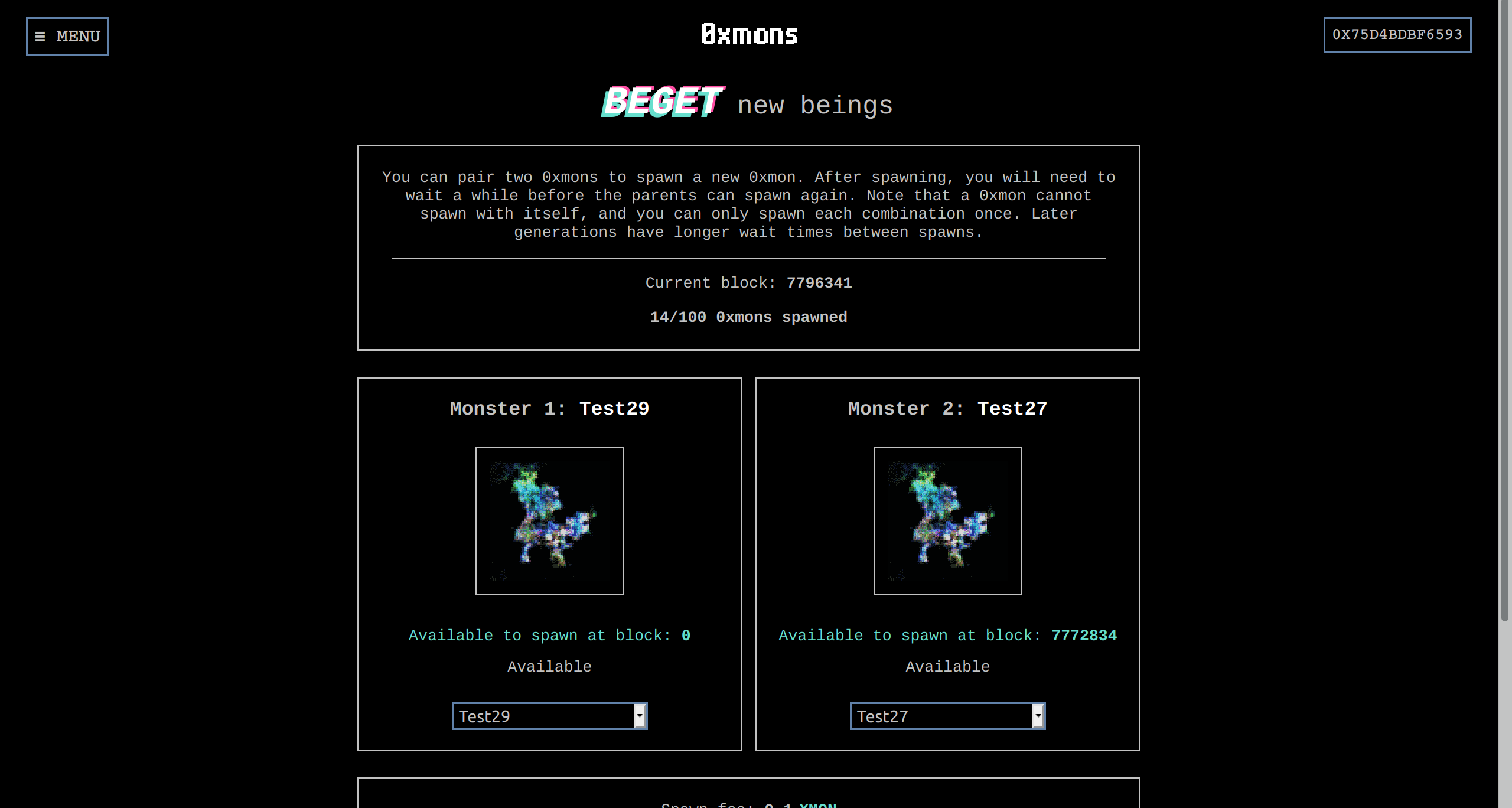 Later generation 0xmons will require longer delays between spawns. The current spawning contract is deployed to mainnet here. Note that it is not live and future versions may be deployed.

Please note, none of the 0xmons contracts have been audited.

However, I take testing seriously. I’ve written a series of tests for all of the moving pieces which can be found here, and the test coverage is close to 100% for all components. I’ve also had the help of several alpha testers playing around with the Rinkeby testnet version, and nothing has broken.

That being said, this initial alpha launch still carries risk, so please keep that in mind.

XMON is the token used for this NFT ecosystem. It has a total supply of 10,000. Approximately 1,200 tokens were distributed in an airdrop to early participants from my previous experimental NFT projects. 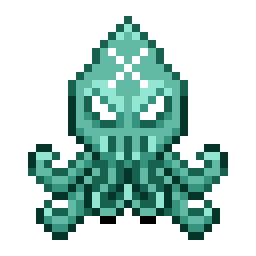 (Thanks to @ecsypz for the token design.)

~~XMON has an adjustable dev fee on transfer. It can be set from 0% to 10%, and it is currently set to 1%. Thus, when buying on Uniswap, you will need to set slippage above 1% to avoid errors.~~

Note that XMON is not a governance token. It is only used as a utility token for the 0xmons NFT platform.

My current plan for token distribution is via LP farming and token bounties for projects that help grow the ecosystem. I am very excited to sponsor art that fits the 0xmons c̸̙̹̥̲̬̮̟̯̓̾ụ̡̲͚̹̑̃͌ṙ̡͈̬̯̯̰̝̟̽s̟̞̝̪͇̹͙͕̉ͥ̒̑́e̳̟͋͟ͅḏ̻̎ͤ͋͗͢ aesthetic. Whether that’s through writing, visuals, music, or otherwise, I welcome creative energy! Reach out to hello at 0xmons, and we can connect.

It is common nowadays to have a platform’s native token also double as the governance token. That is not happening here. Voting tokens in general have several problems, and I’m skeptical of community-based governance “just working” by default. Many projects are looking for good governors, but governance is a costly task, both in terms of time and effort.

To that end, 0xmons is currently more like a personal art project of mine that I’ve opened up for participation from others, rather than a protocol governed by the crowd. While I don’t have special minting privileges for the XMON token (there is no mint function), be aware that I can tweak many of the parameters related to the NFT minting process.

Additionally, the Azathoth summoning and spawning contracts are experimental. There may be future deployments of new ways to mint the 0xmon NFT.

To reduce worries about rug-pulling, the remaining funds have been moved to a multisig wallet. Because the community is still nascent, I’ve reached out to three public devs I know (and recommend!), and they’ve agreed to become signers for the remaining XMON tokens after initial bounties and farming pool are distributed.

As the project grows, and we see people take up bounties / contribute to the project, I hope to eventually add on more 0xmons community members to the multisig. For now, these three devs serve as a sanity check to make sure I don’t do anything reckless like dump all the tokens on Uniswap.

That’s all for now! As I outlined in the Introduction, there is more that I want to develop after the initial launch, but the above outlines what is already live.

My next large-scale addition to the ecosystem will be creating a way for users to directly encode their 0xmon images on-chain. This will consist of an encoding library and a decoding library that other projects can also use. My first focus will be on static images, so the animations won’t be on-chain, but future innovations could change this.

… thus the spirits beckon. No quarter shall be given to the lost lamb, but so in vain are their wanderings, that the paucity of relent shall scarcely go noticed. Dismiss the trepidation…